Carry out an Emergency Stop

As far as the driving test goes, the emergency stop is not a compulsory exercise. It is carried out on roughly a third of tests on a random basis. Most cars now have an anti-lock braking system, but you should still know how to carry out an emergency stop. Proper observation and anticipation should take away the need for emergency braking. However, you should still make sure that you know how to brake firmly to a quick stop should the need arise.

If you are not learning in a car fitted with dual controls, it is important that you learn how to do this at quite an early stage. As you gradually venture onto busier roads it is quite possible that a real emergency may arise. In fact, it may happen when you least expect it on a deserted side street.

Obviously for safety, the emergency stop must only be practised on a fairly empty road. Find a suitable place away from the main flow of traffic and pedestrians.

Now for the theory. To begin with you must make sure when you do this that you react quickly. When the time comes for an emergency stop whether for real or in practise, there will be little time for thought. Although the car has to be stopped quickly, it must also be kept under control. To do this, use progressive braking; firm to begin with and then progressively harder until the vehicle stops. The initial touch on the brake is often the important part. Stamping on the pedal must be avoided, a good firm squeeze is perhaps the best way of describing the method used. The clutch should go down as normal and both hands must be kept on the steering wheel until the car is at rest. 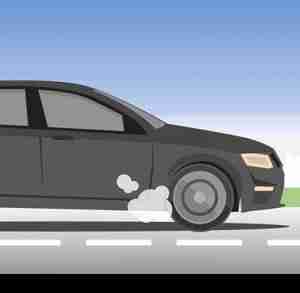 If your car does not have anti-lock brakes, and you brake too heavily you may cause it to skid. The first thing to do in the event of a skid is to take your feet off the pedals. Having done this, the wheels should regain their grip and you can brake again less harshly.

If your car has drifted off course however you need to correct the steering before you brake again. If the back of your car has swung to the left, for instance, you should also steer to the left. You must be careful though not to turn so far that you start a swing in the opposite direction. Once you have regained steering control, the brake can be used again.

Your first few emergency stops should be done from a fairly slow speed until you get used to doing it. You can then increase the speed once you have the hang of it. Make sure that your instructor demonstrates what signal they will give you before you move off.

When ready, make sure the road behind is completely clear and then set off. You should drive as you would normally, picking up speed and changing up through the gears.

Before signalling you to stop, your accompanying driver or instructor MUST make sure it is clear behind. Also, ensure you are not too close to any parked cars or junctions. Also, consider the presence of any pedestrians who may be startled if they are close to the kerb when you brake.

A common fault is putting the clutch down before braking. This can increase the risk of the wheels locking when the driving force is suddenly taken away from them.

Putting the clutch down too late however will result in the engine stalling. This is not a major fault; your main concern is in stopping your car quickly and safely. It is preferable though to keep the engine running so you are ready to move off again as soon as it is safe.

You must also avoid reacting late to the signal or braking too gently.

After an emergency stop, there is usually a gap on the left-hand side; this may be enough room for a cyclist to ride through. To eliminate any chance of danger, always check over both shoulders before driving on after this exercise. Do not feel rushed into setting off instantly if someone approaches behind you. This can cause danger in itself if the other driver attempts to pass you. Ensure that you take proper observation and do not rush, even if you are creating a temporary blockage.

Where space allows, practise the emergency stop until you are able to make a controlled stop from around 30 mph.

Once you have learned how to carry out an emergency stop, it need not be done on every lesson. If conditions were dry, however, when you first attempted it, you should practise again the first time an opportunity arises in the wet. Braking technique does require more mastery on a slippery surface and you should be to carry out an emergency stop in any weather conditions.