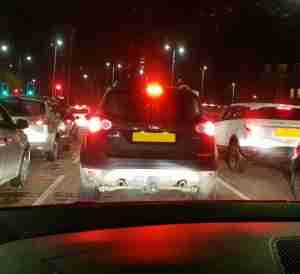 Visibility at night is always going to be lower than during the day. There is one small advantage of driving at night however; a glint of headlights around a corner may warn you of the approach of a vehicle which you may have been unaware of during the day. But if there is no light showing, do we assume that nothing is there and take the corner at speed? What if the driver hidden around the corner has just set off and forgotten to turn on their lights?

Making allowances for the lack of visibility at night should start the moment you go out to your car. If you have just left a brightly lit area, your eyes can take a while to adjust. If you have just come out of your garage where a light was on, don’t come thundering down the driveway the moment you get in the driving seat. That shadow under the overhanging tree at end of the drive could be a pedestrian. Take time to get used to the poor light; and when you first set off keep your speed down until your eyes have had time to adjust.

Your windows may be nice and clean, but the moment you get into a cold car they can start misting over. Turn your demisters on; and if necessary, wait a while until you have some warm air coming through so that the windows stay clear. Don’t forget the rear screen heater if required and open windows if you need to. Don’t drive off until you can see properly all around. Even a small patch of condensation at eye level can dangerously get in the way of your view.

Judgement of situations needs more careful consideration at night. It’s much more difficult to judge speed and distance so be extra careful when emerging from junctions, particularly onto high speed roads.

You must resist the temptation to rely on lights to tell you where everything is, smaller vehicles such as cycles or motorcycles can be cast into shadow by many bright lights around them. You may not know they are there unless you actually make the effort to look for them. Avoid the tendency to react only to what you can see in the lit areas, try to take in the whole picture and always look for movement in the shadows.

You must also bear in mind that as mentioned earlier, people sometimes forget to switch lights on. Unfortunately there is always a risk of encountering unlit cycles; there are far too many irresponsible riders who show a complete disregard for their own safety by failing to carry lights. This can be even more dangerous if you’re emerging from a driveway where a suicidal rider speeds along the footpath as you emerge.

Another thing to be aware of on dark narrow roads, is that when you see what you think is a motorcycle coming towards you, just make certain that it isn’t actually a car with only one headlight before you try to squeeze through that gap!

Pedestrians need special consideration at night, more so in areas which are poorly lit. They may step out of the shadows without warning. Be extra vigilant in narrow streets and residential areas where there are lots of parked cars, and keep your speed down. Your speed is particularly important when approaching hazards such as zebra crossings at night. They’re not all as brightly lit as they need to be; so ensure that you reduce speed and be ready to stop.

Wherever you are at night, ensure you drive at a speed which enables you to stop comfortably within the distance that you can see to be clear. What is said for pedestrians is certainly true for animals too. Particularly if you’re driving along country roads there is always the danger of animals running from the shadows; bear this in mind when deciding what speed to drive at.

Sat Sep 4 , 2021
Are driving examiners set to strike as they vent their anger at the extra work forced upon them by managers at the Driving Standards Agency? Examiners currently conduct 7 tests per day in 57 minute long slots. As the agency panics to try and get the waiting list down after […]