Can I Drive in a Cycle Lane? 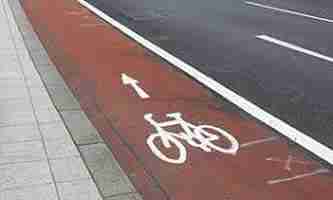 Before you ask yourself, ‘can I drive in a cycle lane’, ask whether you actually need to. Cycle lanes are obviously meant for bike riders (not motorcycles and mopeds!), but can drivers enter them as well? If a cycle lane lane has s solid white line along its border, then you must not enter it. You can cross it however, to make a turn as you would solid lines along the middle of the road.

Drivers should always be aware of any rider who may be coming up on the inside and be prepared to let them pass first. A cycle lane such as this may also have a time plate showing that it only operates during certain times. Outside of these times you can use it as a driver.

Can I drive in a cycle lane when it has a broken border?

In short, yes. Drivers can enter the area but you should always do this with caution and give way to any riders who are using it. You should not enter the lane without good reason however. 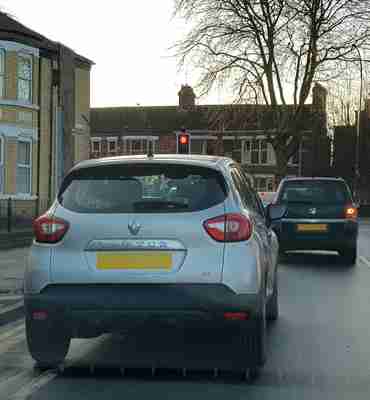 The photo on the left shows an inconsiderate driver waiting at lights. There is plenty of space available but for some reason they have positioned well to the left. You can see that they have needlessly obstructed the cycle lane in a way which will cause problems for anyone trying to ride past.

The photo on the right shows a similar situation. But this time the drivers are guilty of behaving like sheep. The lead driver has stopped at a slight angle. The second driver has pulled up behind them and copied their position, and everyone else has done the same.

As the queue gets longer, eventually the angle means that the last driver is now encroaching into the cycle lane. Their wheels are on the line, but the nearside door mirror could easily catch the arm of a passing rider. Again there is no need at all for the driver to be in this position. Think for yourself and rather than copying what the person in front does, make sure that you stop in the middle of your lane and leave room for those bikes on your left! 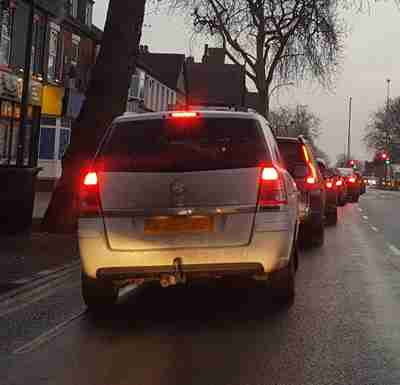